This morning we had quite a strange (nice strange) start to the day.  Matt Heason arrived in the staff room with a tale of amazing endurance, commitment and massive amounts of goodwill, which resulted in a superb assembly.

The tale began yesterday afternoon as Matt was driving back to Grindleford and stopped to offer a gentleman, with a heavy looking rucksack, a lift.  The gentleman turned out to be called Peter and declined the lift as he is trying to complete a sponsored walk between St Andrews, Scotland and Rome, Italy in aid of Alzheimer’s Scotland.

Later in the afternoon, Matt visited the Local Community Shop where the volunteers recounted a tale of a gentleman coming in who was doing a sponsored walk and that one of our pupils, Maddie, had given him her cupcake to eat.  Peter had been about to set up his tent in the Pavilion grounds for the night, but due to football practice taking place, had been advised to visit ‘The Sir William’ to get warm.

Upon entering the Sir William, Peter was greeted by Jamie Cooper and Max Codd who were very interested in his tales and adventures.  Jamie then talked to Terry (owner of The Sir William) and between them they paid for Peter to have a room for the night, beverages and food – how extraordinary generous!

Matt and others then caught up with Peter in the pub and from all accounts had a very nice evening.  Matt mentioned the idea of talking to the children in assembly and thus we all got to meet Peter this morning and what an amazing gentleman he is.

Peter talked to the children about his walk and why he was trying to raise money and awareness of Alzheimer’s and the work the Alzheimer’s Societies do.  He talked the children through his kit and how he is going to be living during his walk and got various volunteers to help him explain things like how he filters stream water in order for him to have a drink.  It was incredibly interesting!

Peter has got a website where we can all track his progress (Maddie’s cupcake was blogged last night!) and give to his fundraising if we would like to.  If you would like a view go to imayrome.eu.

It was brilliant to meet Peter and also to hear how Peter was bowled over by the huge generosity and welcoming he had received by the village as a whole.  What a lovely start to the day. 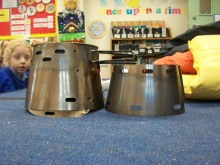 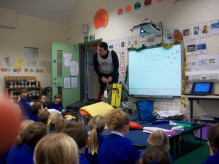 Posted on December 4, 2014, in General Information. Bookmark the permalink. 1 Comment.