We’ve had a very interesting week showcasing our general and specific talents and generosity.

On Tuesday, we were visited by Chris Theyer (Thomas’ mummy) and her friend called Jamie Agnew.  Jamie is making some short films all about The Thomas Theyer Foundation, the Challenge and what they hope to achieve in the future.  The ‘Sports Crew’ had organised a hockey tournament (from scratch, without any adult help) which was filmed, alongside the School Council being interviewed and other fundraising individuals.  It was all very exciting!  We should get a shortened version of the film that we can put on here at some point.  I can’t wait!

Then today we had our long awaited ‘Talent Show’.  Due to already smashing our Thomas Theyer Challenge total, we decided to keep the Talent Show (as it was one of the children’s suggestions) but only charge 20p.  Not only did we watch some amazing talent, but we also managed to collectively raise another £13.40 for Thomas.  That’s a lot of 20ps! 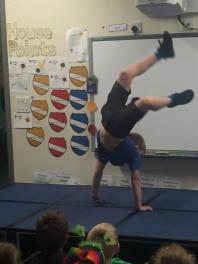 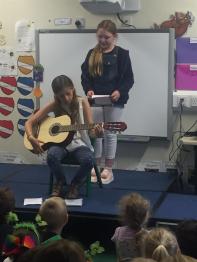 To give you a taste of our afternoon’s entertainment, we enjoyed:  Henry’s magic tricks; the girls doing the ‘Cup Song’; Fin’s magic show; Morrigan with her Poy; Isabelle and Mishka’s comedy magic show; the girls doing the ‘Cup Song’; Orly and Marcia naming all the states of the USA;  Tyler’s Space Cowboy; Lucy and Orla ballroom dancing; and of course the acts in the pictures above.  Wow!  We laughed a lot!

Posted on June 22, 2017, in General Information. Bookmark the permalink. Leave a comment.