To even qualify for the finals you have to get through 3 regional rounds. This year round 2 was cancelled country-wide as it fell on the weekend of the Beast From The East. Dyl was amazing and won both his rounds. In Dyl’s age category they have to climb three boulders and three routes, on top rope. the grading of his routes were 6b, 6c and 7a+, which I’m reliably informed is really hard!!!

The final was a full day’s climbing within Edinburgh International Arena.  This is known as Ratho, a quarry on the outskirts of the city that has a roof over it and an artificial wall inside.  Dyl was competing in Boys Group E, the youngest category, which features boys from years 3 and 4. There are 5 age categories, 9 regions, girls and boys, so a total of 27 in each age/sex category, representing the England, Wales, Scotland and Ireland, so 270 kids in total.

For the last 8 years London and The South East have won the team trophy. This year Peak & Midlands won it by a country mile!

But the biggest news is that Dyl came first!!  He is now officially the UK’s Number 1 climber for his age group – how immense is that??!!  How proud are we?  Quick autograph books out everyone! 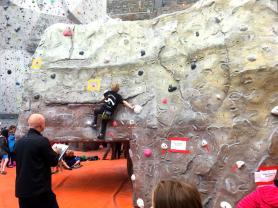 Posted on May 4, 2018, in General Information. Bookmark the permalink. Leave a comment.